On May 25, 2020, the International Scientific and Practical Conference entitled “Russian Language and Literature in the Slavic World: History and Present” was organized by the Moscow State University of M.V. Lomonosov with the participation of more than 500 participants from around the world.

The Faculty of Education of the CU in Ružomberok was also represented among the conference participants. The conference was attended by professor Elena Marková and Mgr. Tomáš Hmíra. Teachers from the Department of Foreign Languages ​​of FE CU presented the status of the Russian language in Slovak schools. Of all the speakers, the popular Russian press Rossiyskaya Gazeta noticed our teachers and gave them a few valuable lines in their article. 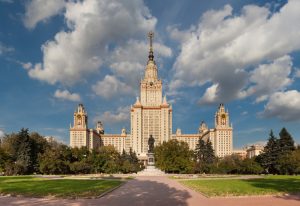 The open conference dedicated to the Day of Slavic Literature and Culture and also to the Day of Philologist was opened by the Rector of MGU Viktor Sadovnčij. Did you know that Moscow State University is the first Russian university and is housed in Moscow’s tallest building? Moscow itself is considered the country’s education center, with more than 300 universities.

Milan Bujňák, Vice-President of the Association of Russist of Slovakia, also spoke at the beginning of the online conference, emphasizing the important role that fine literature plays in a young person’s life. Philologists and educators thus confirmed again that the main task is to help the homeland. And not only in classrooms and auditoriums, but also outside them.